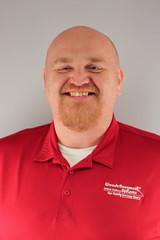 Clay has spent much of his career in the food service industry. He's been certified in food safety multiple times. While Clay has spent time working in nearly every area of a restaurant, his most enjoyable experience was his interactions with customers, ensuring they are satisfied. Clay is also well-acquainted with warehouse environments. He participated in a vocational training program where he learned how to safely use shop tools.

Clay joined Team Woods in April 2018, and what excites him most about his job is the opportunity to directly help people. He is a self-motivated, hands-on individual who loves to fix things. He has proven to be successful when he applies himself to projects.

In his free time, Clay enjoys working on cars. He's not only built a Chevy transmission, but he's built his own Chevy engine twice. Also, he's dedicated nearly two decades of his life playing guitar, learning music, and playing in bands. Though he enjoys his music and cars, his favorite way to spend time is with his children. He enjoys visiting new places, teaching them music, having them in the garage, and just enjoying each other's presence. One thing you may be surprised to learn about Clay is that back in the day, he had long hair that cascaded down his back.

Encapsulating a Crawl Space with CleanSpace

Half Wall Restoration in Stauton, IL.